Please click here to order How to Survive Death and Other Inconveniences. 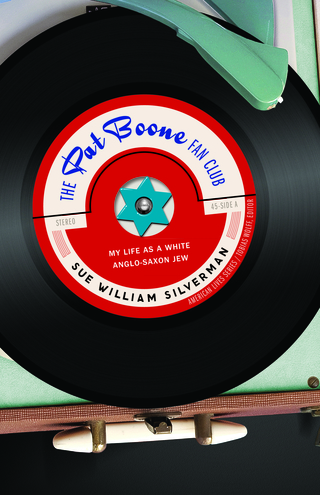 Please click here to order "Because I Remember Terror, Father, I Remember You."

Please click here to order If the Girl Never Learns, a poetry collection. 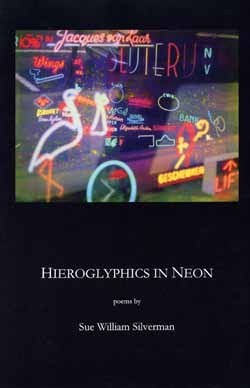 Sue is the award-winning author of four memoirs, two poetry collections, and a craft book on writing. She teaches writing at the Vermont College of Fine Arts, a low-residency program. She is also a professional speaker.

How to Survive Death and Other Inconveniences

One of BIG OTHER'S "most anticipated Small Press Books of 2020"

"One of 11 memoirs by unbreakable woman" ~~ She Reads

now available...and thank you so very much!

I'm pleased to introduce you to my thematically linked essay collection, How to Survive Death and Other Inconveniences (MARCH, 2020). In it, I explore the taboo subject of death. While several pieces use gallows humor as a way to deflect, I also directly confront my fears of the ultimate unknown. Please click here to order directly from the University of Nebraska Press (the American Lives Series).

“The Pat Boone Fan Club: My Life as a White Anglo-Saxon Jew is a series of riveting essays about growing up Jewish in a Gentile world by the accomplished memoirist Silverman.... A masterly stylist continues her uncompromising examination of the inner life.” Kirkus Reviews

“Silverman’s language is, by turns, blunt, wrenching, sophisticated, lyrical, tender, hilarious. She writes with wicked dark humor, splendid intelligence, wry wit, and honest confrontation. There’s no other book quite like it.” Lee Martin, author of From Our House

“Although many of the topics and themes in these essays are somber and sincere, Silverman’s ever-present humor sets a self-deprecating tone. . ." newpages.com

“Silverman is the Tennessee Williams of memoir.” Robert Vivian, author of The Least Cricket of Evening

"Love Sick provides an honest and deeply chilling account of what it's like to suffer from a compulsion to look for love in what are most definitely all the wrong places." Francine Prose, Elle

"A self-proclaimed addict looks unflinchingly at the source of her sickness and her road to recovery." O (the Oprah Magazine)

"In the existing literature on sexual addiction, this book stands alone: a woman's narrative of her own personal story. As self-help, Love Sick will resonate with not only those who suffer from sexual addiction, but also anyone whose compulsive behavior, whether with drugs, money, or food, threatens his or her emotional well-being. And as memoir, Silverman's account is an important literary accomplishment, one that will move anyone who reads it." recoveryworld.com

"Silverman's stark story of struggle and recovery, told without jargon or psychobabble, creates a wrenching portrait many women will relate to--a portrait of someone who is looking for love, but finds sex instead." Lifetime-TV

"Fearless Confessions is such a dynamic guide to memoir writing it has inspired me to completely refine and retool the memoir I’m working on. Sue William Silverman, a faculty advisor at the Vermont College of Fine Arts, is an amazing master of the language. Her prose is as enjoyable as it is instructive. This should be an essential textbook of any creative writing course. She gives examples of memoir pieces and analyzes each one, showing how they work, why they’re powerful, and even why some fail to impress." 15-Minutes Magazine

"Silverman's lyric style transforms a ravaged childhood into a work of art. The book reads like a poem." St. Petersburg Times

"A rough emotional ride, but it is well worth it." Ms. Magazine

"Profoundly moving in its portrait of a child's fear, confusion, and desperate search for a safe place." Kirkus Review

I speak on such topics as sexual addiction, child abuse prevention, spirituality, and family dynamics. I deliver presentations at colleges and universities, professional conferences, and social service organizations. I also speak about the importance of writing your life story.

I have appeared on many national radio and television programs such as The View, Anderson Cooper-360, CNN-Headline News, the Discovery Channel, a John Stossel Special on ABC-TV, the Montel Williams Show, the Ricki Lake Show, the Morning Show with Mike and Juliet, and PBS Books. She was also featured in an episode of "The Secret Lives of Women" on WE-TV.

I teach writing at the low-residency MFA program at Vermont College of Fine Arts.

A PERSONAL MESSAGE FROM SUE

One book. Two books. Three. Four. Why have I written four memoirs?

Even though each of my memoirs stands alone in and of itself, still, there are connections as I move from terror in Because I Remember Terror, Father, I Remember You...to edgy danger in Love Sick: One Woman's Journey through Sexual Addiction...to a deepening search for identity (both ironic and spiritual) in The Pat Boone Fan Club: My Life as a White Anglo-Saxon Jew. Now, in my fourth memoir, How to Survive Death and Other Inconveniences, I explore the ultimate unknown--even as the book is also an exploration on how to survive life!

On this path from book to book, there is also a movement from darkness to light to intense questioning -- and from danger to humor – or, at least, in The Pat Boone Fan Club and How to Survive Death and Other Inconveniences, black humor! As these narratives flow one into the other, my life clarifies. I emerge from the journey more whole, more “me,” more aware, and less conflicted.

With Fearless Confessions: A Writer's Guide to Memoir, I share my experiences learning how to write, with the hope it'll help and encourage you to tell your story, too.

In my two poetry collections, Hieroglyphics in Neon and, my newest, If the Girl Never Learns, I'm able to explore life, metaphoric life, using different images from my prose.

For more information about my books, please click on "Sue's Books." 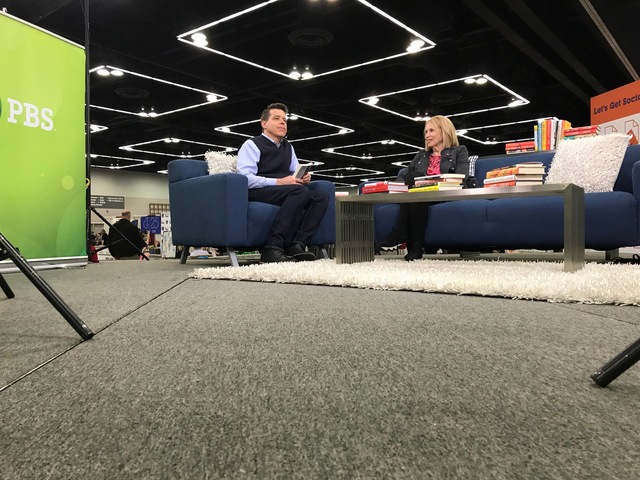 Sue with Rich Fahle, Executive Producer, of "PBS Books."
At the Association of Writers and Writing Programs annual convention, March 31, 2019, Sue was interviewed by Rich Fahle at "PBS Books" about writing, the importance of AWP, and her first book, "Because I Remember Terror, Father, I Remember You," which won the AWP Award in creative nonfiction. Click to watch the ten-minute video.