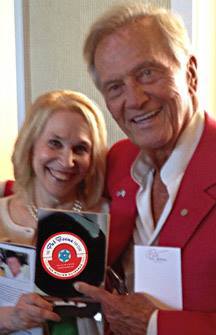 Here I am with Pat Boone at his 80th Birthday Party Celebrity Roast, June, 2014, at the Beverly Hilton Hotel.

“Although many of the topics and themes in these essays are somber and sincere, Silverman’s ever-present humor sets a self-deprecating tone…. Readers will relate to these stories, for while they’re directly about this writer’s spiritual journey, they’re also about the universal feeling that one doesn’t quite belong, and the fact that Silverman has survived, recovered, and discovered her true self gives hope to the rest of us.” newpages.com

“Silverman is a stunning, unconventional writer of memoirs. The title alone deserves scrutiny (and a prize).” Newworld Review 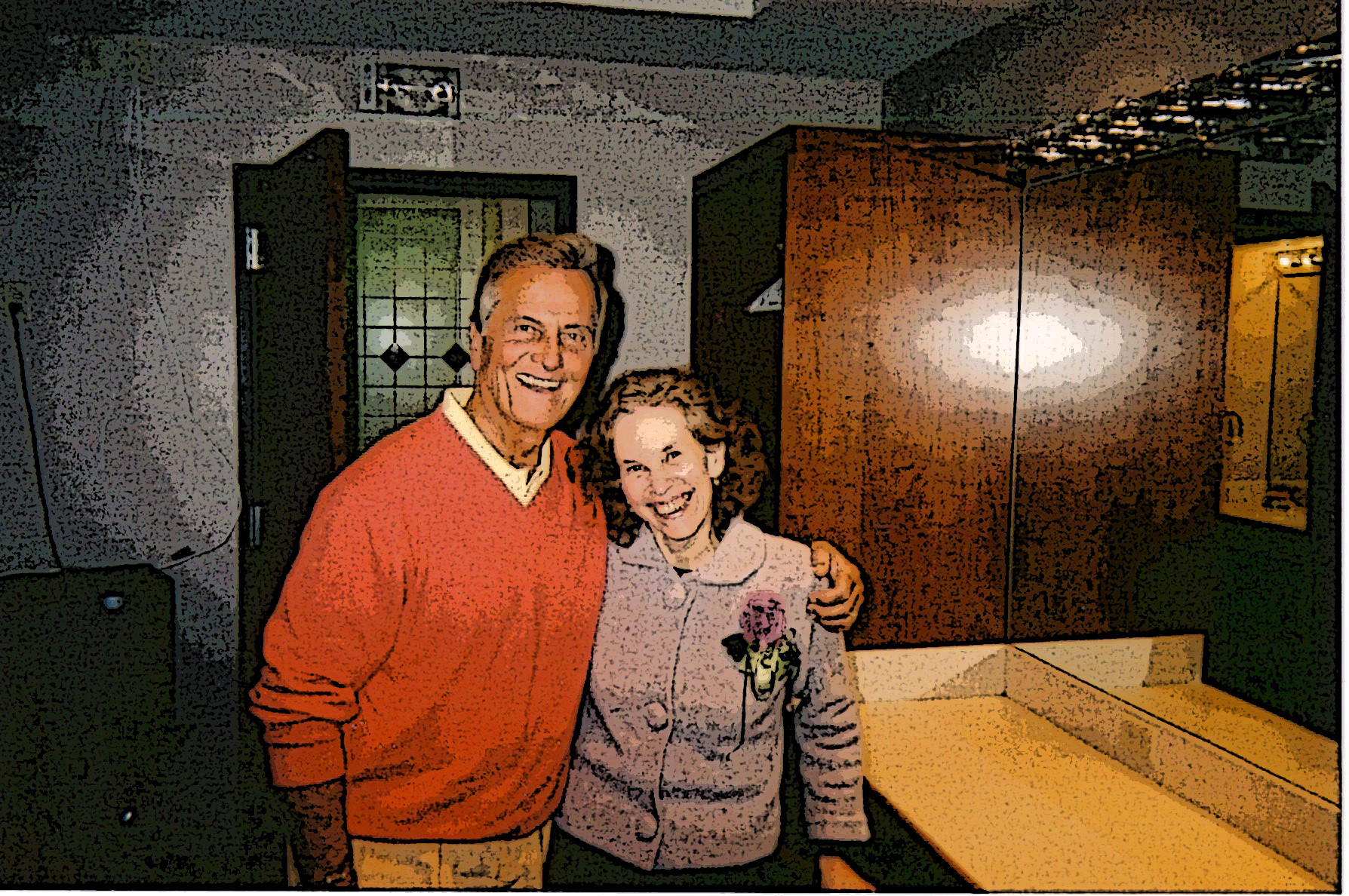 Here I am with Pat Boone after his Christmas concert at the Macomb Center for the Performing Arts in Michigan. Well, in Photoshop, I "cartooned" the image a bit to make it more playful!

“A…book with a poetic gracefulness, the author draws readers into her life while simultaneously writing in a way that allows them to experience the disconnectedness that Sue describes having endured. It is inspiring to read the words she penned…” Vickie S. Miller blog book reviews

“A delightful and humorous memoir…. The book surprised me with its humor, irony, and range of voices. The title is a clue to the tone of playfulness and the different shifting lenses through which we’ll view her life. Sue seems to delight in the carnival of wavy mirrors in the funhouse to turn “reality” upside down and backwards as she experiments with language....” The National Association of Memoir Writers 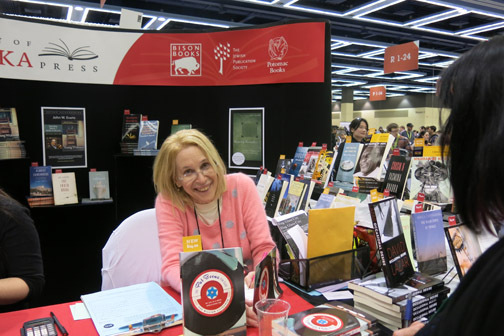 Sue signing copies of "The Pat Boone Fan Club" at the University of Nebraska Press booth at the AWP conference in Seattle, March, 2014.

The Pat Boone Fan Club: My Life as a White Anglo-Saxon Jew 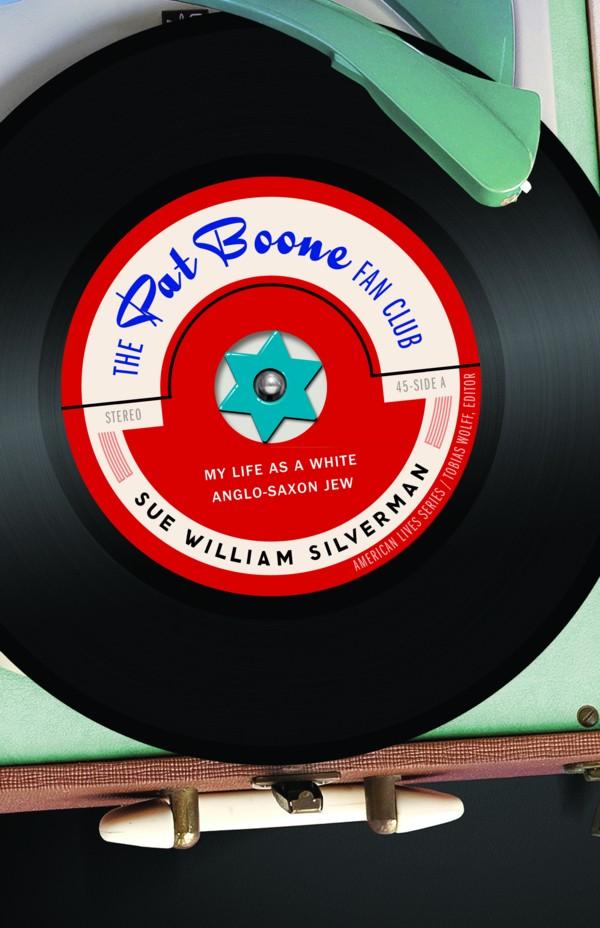 Gentile Reader. And you, Jews, come too. Follow Sue William Silverman, a one-woman cultural mash-up, on her exploration of identity among the mishmash of American idols and ideals that confuse most of us, or should. Pat Boone is our first stop. Now a Tea Party darling, Boone once shone as a squeaky-clean pop music icon of normality, an antidote for Silverman’s own confusing and dangerous home, where being a Jew in a Christian school wasn’t easy, and being the daughter of the Anti-Boone was unspeakable. And yet somehow Silverman found her way, a “gefilte fish swimming upstream,” and found her voice, which in this searching, bracing, hilarious, and moving book tries to make sense of that most troubling American condition: belonging, but to what?

Picking apricots on a kibbutz, tramping cross-country in a loathed Volkswagen camper, appearing in a made-for-television version of her own life: Silverman is a bobby soxer, a baby boomer, a hippy, a lefty, a rebel with something to say to those of us, most of us, still wondering what to make of ourselves.

A series of riveting essays about growing up Jewish in a Gentile world by the accomplished memoirist Silverman.

Having written haunting memoirs about being sexually abused by her father throughout her childhood (Because I Remember Terror, Father, I Remember You, 1996) and her subsequent sexual pathology (Love Sick: One Woman’s Journey Through Sexual Addiction, 2001), the author returns to another troubling theme that caused an early self-splintering. Moving between the Caribbean and New Jersey as her father pursued high-powered jobs as a government official and banker, Silverman fixated on Pat Boone as a kind of immaculate other, a talisman that would keep away all the unpleasantness from her life, such as an abusive father, stifling Christian community and Russian refugee grandmother with her strange shtetl ways. Comparing herself to a gefilte fish (not even a real fish but a “ball floating in jelly, stuffed in fish skin….All evidence of its fishness—its true identity—gone”), Silverman addresses readers in missives between chapters, imparting cohesiveness to the discrete, elliptical essays. For example, in the first essay, she writes of tracing her finger over an arresting photograph in Life magazine depicting Boone and his happy family of four daughters on a tandem bike; she was fascinated by the photo’s “whiteness,” how its “immaculate universe was safe, far away from my father’s all-too-real hands, hands that hurt me at night.” In “Endless Possibilities of Youth,” the author discusses how, as a young adult, she was told of the suicide of her Christian rival, which plunged her into a maelstrom of memory about their fickle high school boyfriend, the first of many non-Jewish men she was attracted to and who couldn’t quite accept her Jewishness.

A masterly stylist continues her uncompromising examination of the inner life.

“Silverman’s language is, by turns, blunt, wrenching, sophisticated, lyrical, tender, hilarious. She writes with wicked dark humor, splendid intelligence, wry wit, and honest confrontation. There’s no other book quite like it.”—Lee Martin, author of From Our House

“Reading The Pat Boone Fan Club feels like sitting down for coffee with a long-lost friend. Silverman reveals the heights that skillful and innovative memoir can achieve.”—Hope Edelman, author of Motherless Daughters

“Filled with warmhearted humor and profound compassion, this tour de force exploration of the search for identity is a joy to behold.”—Kaylie Jones, author of Lies My Mother Never Told Me

“Silverman is the Tennessee Williams of the memoir.” –Robert Vivian, author of The Least Cricket of Evening

The Endless Possibilities of Youth ~~

That Summer of War and Apricots ~~

Concerning Cardboard Ghosts, Rosaries, and the Thingness of Things ~~

Fahrvergnügen: A Road Trip Through a Marriage ~~

Almond Butter in the Ruints ~~

I Was a Prisoner on the Satellite of Love ~~
(Featuring Crow T. Robot, star, Mystery Science Theater 3000)